The period before the monsoon season in Nepal is notorious for thunderstorms, with heavy rain and strong winds.  This year was no exception. In April we learnt that the storms were of such magnitude in the Bara and Parsa districts of southern Nepal that they resulted in  deaths and the destruction of homes.

Sadly these thunderstorms affected the displaced encampment in Uttargaya where HEED is currently working to install design interventions intended to monitor energy usage.  Although there were no casualties, several homes were destroyed making thirteen families homeless, and a number of electric power lines were brought down that resulted in a loss of electricity to the residents.

Damage was also caused to two of the project’s interventions: one of the seven footfall monitors that are attached to street lights and one of the WIFI outdoor amplifiers. Responding to the situation, a team from HEED, including a PhD student from Coventry University and project partners from Practical Action, visited the Uttargaya from May 22nd -30th 2019 to remove and replace the footfall monitor and WIFI amplifier with new units.

In addition, the site visit provided the team with an opportunity to download data from the SD cards in the footfall monitors and to install in twenty-one homes a number of Individual Appliance Monitors (IAMs) and Raspberry Pi gateways that had been shipped over from the UK in February.  In all, sixty-three IAMs were attached to a range of household appliances that are in regular use by households, such as phone chargers, TVs, fans and fridges, to monitor usage and collect data. 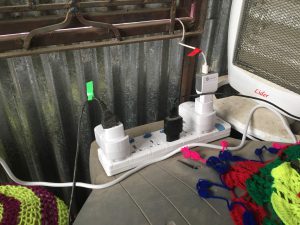 For Brandi Jess, a doctoral student at Coventry University who oversaw the design intervention installations in Nepal, this trip gave her greater insight into the issues that displaced people encounter in accessing energy:

‘Being able to deploy energy interventions in Nepal has allowed me to get first-hand knowledge of what life is like in the camp and how energy poverty impacts their lives. I feel this research is so important not only to address the energy needs within this community, but to also extend the knowledge and findings to other displaced communities to be able to address energy needs and aspirations.’

The data collected on this trip will be analysed over the next couple of months to better understand energy usage, needs and aspirations for  displaced populations.