Solar energy systems providing electricity to refugee communities have frequently not been successfully implemented. We expected challenges would be encountered, including a lack of local understanding on solar systems and skills required for maintenance. But we also found there is a dearth of technical information on how energy from these systems is used in camp settings and the consequences this has on system performance and efficiency.

As part of the HEED project, we are looking at how refugees use energy at two off-grid solar-battery systems: the first system is a micro-grid providing electricity to two nurseries and a playground; the second is standalone solar system powering a community hall. Our aim was an energy system that was co-designed with the community. We spoke with the communities to see what facilities would benefit from power and carefully listened when they told us what they wanted to use the systems for and the type of activities they envisaged would take place because of an energy intervention. Based on this information, we sized and installed these systems to cover their immediate needs and allow for potential growth in activities over time. As an energy system designer, one of the difficulties working in the displaced context is refugees don’t have many electronic devices that are common in most other households and settings so talking with them helped me make appropriate decisions about the capacity and sustainability of the micro-grid.

In working with the community, our research has explored ways to encourage engagement and knowledge of energy systems. One successful implementation was the use of community mobilisers, who worked with us to learn about the systems and disseminate this to others. Having someone based at the camp meant that they also reported issues and gave us an opportunity to hear the community’s voice and gather feedback. 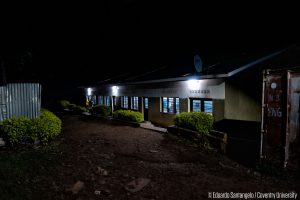 Over the project’s lifetime, we have seen how communities become agents of change in responding to improved energy resources. For example, at the community hall, there has been significant growth in the use of the space and energy for education, meetings and other events such as weddings. The community have also found funds for a projector and plan to set up film screenings. At the other site powering the nurseries and playground, the use of energy has remained relatively constant. Our next stage is now exploring the reasons and mechanisms for the differences observed at these installations. We are also investigating the impact the energy usage, and demand patterns have had on system performance. There is still a large amount of extra energy available from our systems, so we are trying several initiatives to promote ownership and self-governance to increase energy utilisation. The aspiration is that this will have a positive impact on both the lives of the refugee communities and the longevity of the installed systems.