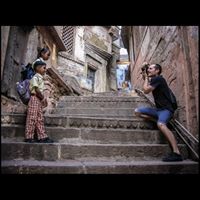 EED to document the impact of the HEED project’s energy interventions on the displaced community living in Khalte, Nepal, Edoardo had the opportunity to be a witness to the different project stages. In depicting stories of change that Khalte’s inhabitants are experiencing since the HEED project deployed its interventions, he had the privilege to be a visual ambassador of these narratives.

Edoardo: ‘To provide some context, I’d like to tell the story of Purna, one of the two social mobilizers employed by HEED, who has been critical in ensuring the smooth delivery of the project on the ground.

Before the terrible earthquake that struck Nepal in 2015, Purna had been living in Malaysia for over four years, working hard to save money and sending remittances to sustain his family back in Nepal. After almost five years, Purna made his way back to Nepal and realised the dream of his life: build a new house for his family. Unfortunately, after only a few months he returned to his home country, the earthquake hit Nepal, killing and injuring thousands of people and devastating the whole country, including Purna’s village in Rasuwa District.

Purna and his family were relocated to Khalte, a temporary settlement built far away from the risk of landslides. Despite being in a safer location, life in Khalte is very challenging; displaced people live under precarious conditions, in metal-sheet houses and lacking access to adequate energy provision. 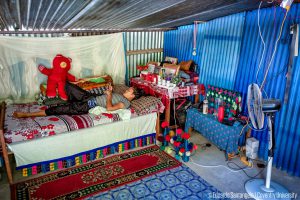 HEED project’s remit has been to understand the energy needs the community faced, and effect sustainable change. The Human Stories depicted through Edoardo’s images reflect the dramatic changes in the way people live, work and socialize in the camp.

For example, children can now prolong their studying well beyond the dusk, and elderly people can safely walk at night without the need to carry torches to spot holes or dangerous animals. Businesses can extend their activities until midnight and shops are seen within the valley with customers coming from neighbouring villages.’