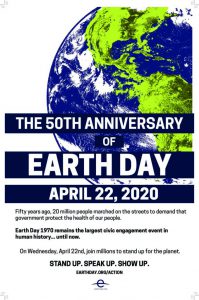 On April 22, 1970, 20 million Americans took to the streets to protest about what they saw as a governmental failure to address an increasing global environmental disaster. In recognition of that protest, in 2016, the United Nations chose Earth Day as the day when the historic Paris Agreement on climate change was signed.

This year, Wednesday the 22nd of April is the 50th Anniversary of World Earth Day, but due to the seriousness of COVID-19, there is no worldwide public event. Instead, the organisers of World Earth Day have asked that on April 22nd we take part in 24 hours of action in a global digital landscape with global conversations, calls to action, performances, video teach-ins and more.

It is evidential that more needs to be done to address the continuing environmental and climate crisis. With that in mind, we at HEED will be taking part in this global action by launching a series of videos through social media and the website. These videos document the impact of the HEED energy interventions on everyday lives to tell stories of change.